Voters rank the candidates in order of preference, with “1” being the highest (most preferred) ranking. For example, if there are three candidates, the voter places “1” beside their first choice, “2” beside their second choice, and “3” beside their third choice.

The difference between a regular preferential vote and STV is the number of vacancies. The basic preferential vote has one vacancy (a single seat); when multiple vacancies exist, STV is used to tally the votes. With multiple vacancies, during the tally, surplus votes are “transferred”, based on the ranking assigned to the candidates at the time of voting, in order to ensure that all vacancies are filled. To transfer votes, ElectionBuddy uses the Meek’s STV Method. This will be explained in more detail in “How the Results are Calculated”.

STV is a great voting method when it comes to filling multiple vacancies, but there are some limitations to it that may make other voting methods a better option.

STV sets a quota that needs to be hit during each round. What it doesn't do is rank them; it's just specifying which candidates achieved the necessary quota and continues to calculate rounds of voting based on the ranked voting choices by the voters until the vacancies are filled. A read of Meek's Method will help you understand why a ranking is not possible given the calculation.

If ranking the winning candidates is the goal, we would suggest usingPlurality (also known as 'First Past The Post') followed by further rounds of votes (as separate new votes, more commonly known as 'runoff votes') until you have determined the rank order. Or you can do 'Scored Voting' but voters can assign the same score to multiple choices. 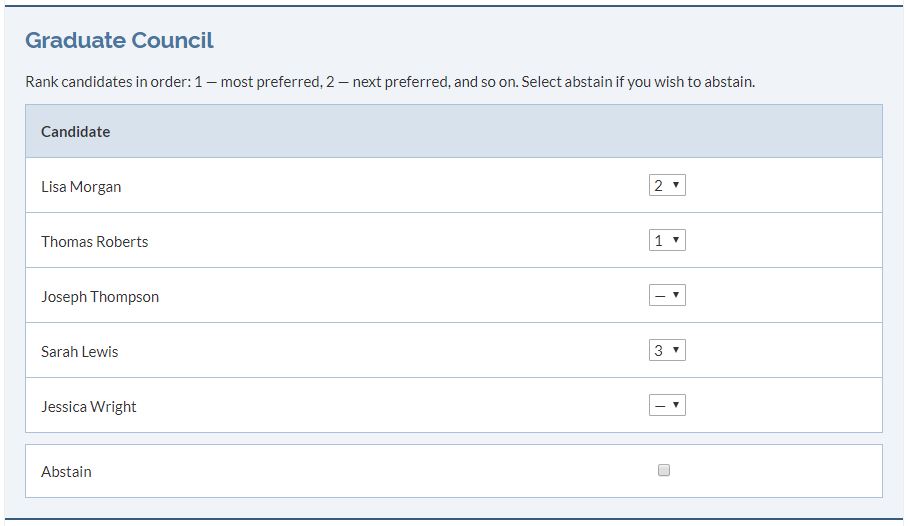 The ballot, as experienced by the voter, is no different than a regular preferential vote. The tallying is where the magic happens!

Results are calculated through the process of redistributing the votes and eliminating low-ranked candidates in rounds to try and get a candidate across the quota of votes required to win. To generate a quota, the total number of submitted votes in a vote is divided by the number of available vacancies for the position plus one. Then, 1/109 is added to that quotient, and the result is truncated to 9 decimal places. For example, if we have 115 votes cast in a vote where the position up for voting has three vacancies:

In the first round of tallying, the first preference on each ballot counts as a vote for that particular candidate. Any candidate who has at least the minimum number of votes required, as dictated by the quota, is automatically considered a “winner”. In our above example, the candidate would need to have at least 28.750000001 votes to win.

The quota can change if a vote is “exhausted”. A vote becomes exhausted in the event that the voter has not indicated a different candidate to transfer their vote to, or all of their other indicated candidates have already been eliminated. If the voter has not indicated a preference for their vote to be transferred to, then once their final ranked candidate is eliminated, the voter’s vote is eliminated with the candidate. This affects the quota because it affects the numerator of the quota formula: the total number of votes cast is decreasing.

No matter whether the votes are coming from an eliminated candidate, or from surplus votes from a candidate above quota, the transferring process is the same. Votes are transferred to the next highest-ranked candidate, as indicated by the voter. However, there is a big difference between transferring surplus votes, and transferring votes from an eliminated candidate. When a candidate is eliminated, all of their votes get redistributed, but when a candidate has surplus votes, only some of their votes are redistributed. Depending on which votes are considered “surplus”, the outcome for other candidates can change: if two voters indicated a candidate who has surpassed quota for first place, but their second-choice rankings are different, the outcome for the next candidate could be affected depending on which of the two voters’ ballots are considered “surplus”. To solve this problem, fractions are used to determine the outcome, which keeps the vote distribution fair and unbiased for all candidates.

ElectionBuddy uses Meek’s STV to transfer votes. The candidates who have hit quota continue to be apart of the receiving and transferring of votes. Each candidate is assigned a keep factor that identifies how much of the votes the receive should be transferred away. So, any candidate under quota will have a keep factor of 1, because they will keep the entire portion of the vote and not transfer anything away.

Candidates above the quota will have a keep factor of less than one, because their votes will always have a portion transferred away to keep them at quota. Because the candidates are always getting votes, even if they’ve reached or surpassed quota, the voter’s votes are always going to their intended candidates, even though a portion of that vote may be transferred away.